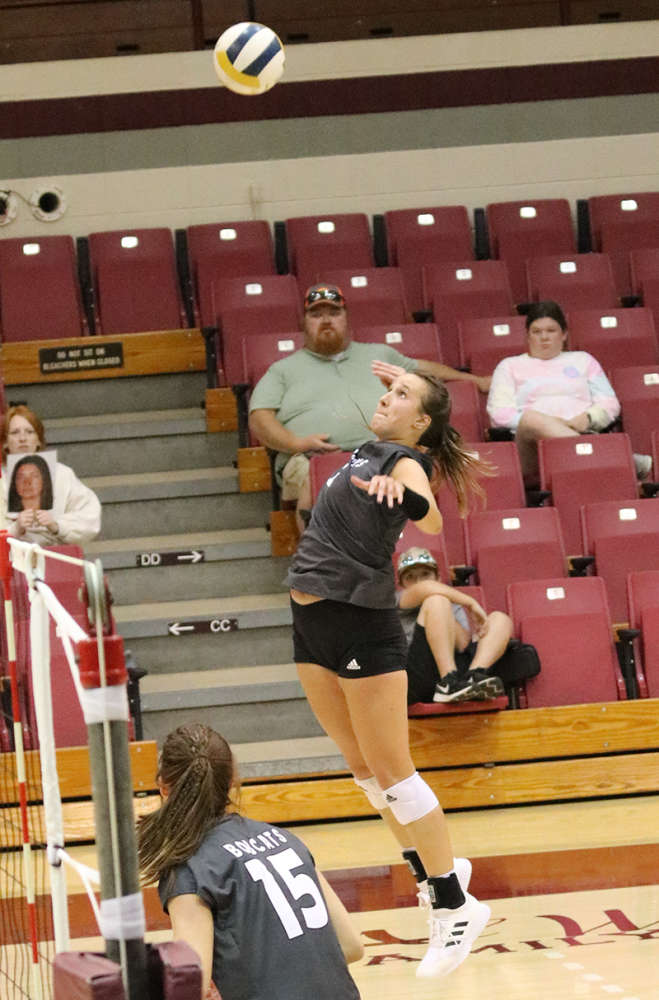 A busy for day stretch for the College of the Ozarks Volleyball team wraps-up Monday with a win over Stephens College.

Recaps of both Saturday's and Monday's Matches are below from College of the Ozarks Sports Information:

Going into their fourth match in as many days, the College of the Ozarks Lady Bobcats welcomed the Stephens College Stars to Keeter Gymnasium Monday evening. Winning both matches Saturday, the Lady Cats hoped to carry over the momentum to the match with Stephens. The Stars, on the other hand, had different plans.

In the opening set, the Stars jumped out to an early 6-2 lead and it appeared the Lady Cats would have their work cut out for them. Kills by Kiley Counts and Christa Duffel cut the deficit to one, 8-7 and the Lady Cats were looking to turn up the intensity. The two teams exchanged points and Christa Duffel tied the score with a kill, 9-9. The Stars broke the serve and continued to hold a slight advantage. Slowly the Stars began to pull away and Coach Muckenthaler took a timeout to regroup, with her team trailing 16-13. Stephens continued to pull away out of the huddle and the momentum was on the side of the Stars. The Lady Cats needed to respond. A Kiley Counts kill cut the deficit to two, 20-18, but Stephens continued to answer the challenges. A Bri Linehan kill was followed by a Mica Chadwell service ace and a Stephens error and the Lady Cats were back within one, 22-21. A Bri Linehan kill then forced a Stars timeout and the score was even, 22-22. Stephens responded with two straight points before a Bri Linehan kill was followed by a Kiley Counts kill to even the score again. Brooklyn Crawford slammed the next ball to the Stars side of the floor and the Lady Cats took their first lead of the set, 25-24. Stephens quickly called a timeout to stall the momentum. With Bri Linehan serving, Morgan Austin picked up a kill for the final point and the Lady Cats took set one, 26-24.

With the set one, come from behind win, the Lady Cats claimed the momentum and jumped out to an early 3-1 lead in set two. Stephens quickly bounced back to tie the score, 4-4, and the tug-of-war was on. The two teams began trading points with the Lady Cats holding a slight advantage. With a couple of Stars errors and a Christa Duffel kill, the Lady Cats began to build a lead. A trio of Stephens errors and a Morgan Austin kill put the Lady Cats up 16-10, and Stephens needed a timeout to regroup. A block for a point out of the huddle was followed by a Duffel kill and a Stars error. The Lady Cat lead climbed to 19-10 and the pressure was mounting on the Stars. Stephens was out of sync and the Lady Cats were in control of the set. A Madelyn Sestak kill pushed the score to 23-13, but Stephens refused to go away. After a pair of Stephens points, a Brooklyn Crawford kill and a Mica Chadwell point on a return finished the set, 25-16.

Leading 2-0, the Lady Cats were eyeing the sweep in set three. Stephens was determined to avoid the sweep and came out swinging. An early 4-1 lead was the result, but the Lady Cats used kills by Bri Linehan and Brooklyn Crawford to battle back. A Stephens error gave the Lady Cats their first lead, 6-5, and the teams began trading points. Stephens regained the lead and began to slowly pull away. Trailing 11-7, the Lady Cats needed to turn the tide. A Stephens error and a Christa Duffel kill started the rally, but Stephens continued to apply pressure. A Lady Cat block for a point and a Stephens error tied the set, 12-12, but the Stars responded to maintain the advantage. A 6-1 Stephens run force a Lady Cat timeout to regroup. The run was halted with a Christa Duffel kill out of the huddle and the Lady Cats had work to do. Stephens answered the challenge, but the Lady Cats used a pair of Brooklyn Crawford kills to battle back to within three, 21-18. A Morgan Austin kill cut the gap to two and a block by Kiley Counts landed on the Stars side of the floor. Stephens called a timeout with their lead cut to 21-20 and the Lady Cats knocking on the door. A pair of Stephens kills out of the huddle provided some space and forced a Lady Cat timeout, trailing 23-20. A Morgan Austin kill stopped the string and a Kiley Counts kill cut the gap to one, 23-22. Counts immediately slammed another ball home and Stephens took another timeout with the score knotted at 23. Counts found the hardwood with another kill out of the huddle and the Lady Cats took the lead. Stephens answered, however, then regained the lead on the next ball. C of O battled but the Stars forced an error and took set three, 27-25.

With momentum on their side and their backs still to the wall, Stephens came out in attack mode in set four. An early 2-0 lead resulted, but the Lady Cats were determined to regain control. A Kiley Counts kill was followed by a trio of Stars errors and a Christa Duffel kill, and the Lady Cats took a 6-2 lead. A Morgan Austin ace bumped the score to 7-2 and the Lady Cats were applying pressure early. A pair of Lady Cat kills forced a Stars timeout with the score standing at 9-2. The timeout was effective for Stephens and they began to keep pace with the Lady Cats. C of O continued to answer the challenge of the Stars and maintained their seven-point advantage through the midway point, 15-8. Stephens then turned up the intensity and put together a 3-0 run. The Lady Cats responded with a 4-0 run of their own and Stephens took a timeout, trailing 19-11. Stephens came out of the huddle with a 4-2 run and the Lady Cats took a timeout to cool off the Stars. Another well placed ball by Counts and a Stephens error bumped the score to 23-16 and the Lady Cats could smell victory. A Brooklyn Crawford kill set up match point for the Lady Cats and another kill by Crawford sealed the set win,25-17, and the match win 3-1.

Kiley Counts led the charge with 14 kills and 23 digs. Mica Chadwell led the defensive effort with 30 Digs, while Morgan Austin contributed 14, and Christa Duffel and Jocee Pettyjohn each tacked on 10.

The Lady Cats will be back in action at home Friday, September 30 as they take on Ozark Christian College.

More details on the Lady Bobcat Volleyball team and all teams can be found on the College of the Ozarks Athletics Website.